Starbucks Corporation or Starbucks is an American chain of coffee shops based out of Seattle, WA. As of November 2021, the company had 33,833 stores under the Starbucks brand in 80 countries. 15,444 of these were located in the United States. Out of Starbucks‘ U.S.-based stores, over 8,900 are company-operated, while the remainder are licensed operations.

Jerry Baldwin, Zev Siegl, and Gordon Bowker founded Starbucks in 1971 at Seattle’s Pike Place Market. They sold the company to Howard Schultz in the 1980s.  Schulz aggressively expanded the company – first in Seattle, then on the West Coast, before going countrywide and, finally, global. The company has been through Orin Smith, Jim Donald, Schulz again, and Kevin Johnson. As of April 2022, Howard Schulz is the CEO is of Starbucks for the third time. 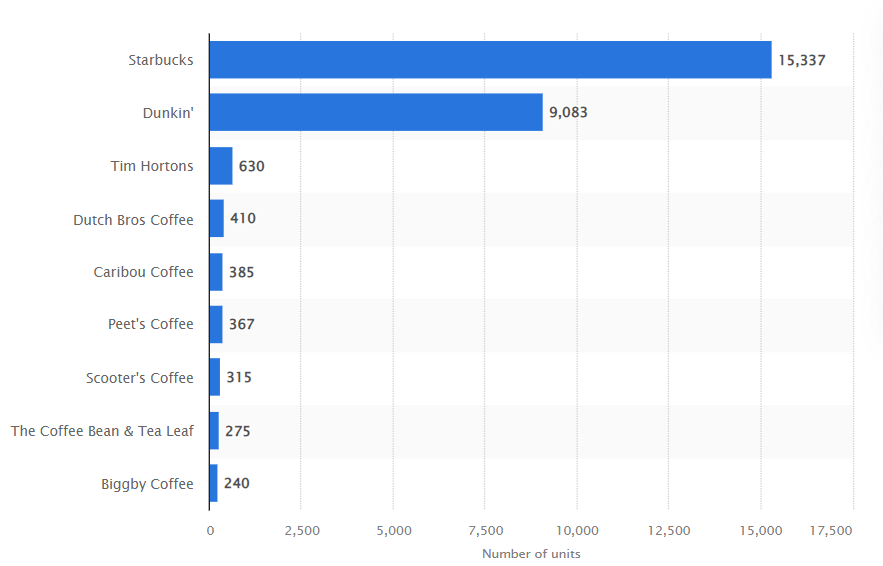 Starbucks is the biggest coffee chain in the US and worldwide.

How is Starbucks positioned in the Food and Beverage industry?

The Food and Beverage industry in the USA accounts for 13% of all manufacturing employment in the country. Around 1.46 million people are employees in this industry. Food franchises make up to 36% of the total franchise establishments in the USA and it is expected to create 1.6 million more jobs by 2027. The annual growth rate in the industry is around 2% and the EBITDA multiplier is around 3x for a single restaurant. Multiples can go up to 7x for 5+ restaurants.

One of the benefits of buying a coffee shop is that you require very little industry-specific knowledge. Many first-time business owners buy coffee shops and this industry is very popular among first-time franchise owners. There is a lot of information about general business practices as well as coffee shop specifics, so the learning curve is less steep. Any owner in the industry is expected to be knowledgeable in the specifics of coffee, trends, and coffee-related drinks.

What characterizes the coffee shop industry is the high turnover and discretionary spending. This industry has experienced a period of rapid expansion over the last decade. The existing competition in the industry is expected to intensify. Industry profitability is expected to increase, recovering from the decline early in the period. International expansion is anticipated to be the largest source of revenue and profit growth. 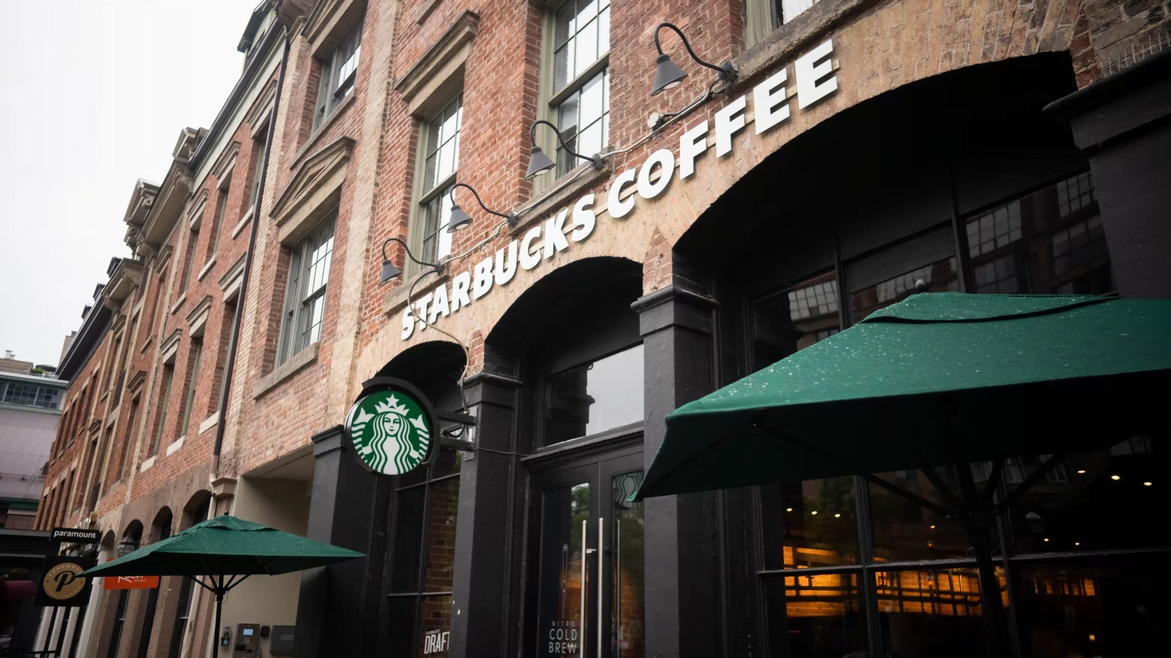 How to start a Starbucks Franchise?

Unfortunately, Starbucks does not offer Franchises anymore but you can still open a licensed store!

Quoted from the company website, “Thanks to the huge success and dedication of its current Franchise Partners, Starbucks is not currently recruiting any new franchisees. You can still open up what is called a “licensed” Starbucks store.”

As Starbucks positions its licensing program, “It’s like renting the brand instead and the company’s likeness instead. You’ll need to pay a licensing fee rather than a franchising fee.” A licensed Starbucks costs around $315,000 for the license fee and some of the key fixtures. You can expect to invest $1,100,000 to open a new Starbucks location and significantly less for a kiosk in a not traditional location (airport, mall, etc.). You need $700,000 in liquid assets to be considered for a licensed store.

What are the Financial requirements for a Starbucks licensed store?

How much do Starbucks locations make?

Starbucks does not disclose any financials regarding franchises but we estimate that the average franchise makes $1,235,000. We are going to estimate $1,100,000 as the initial investment, but it can be much lower for a kiosk in an airport, hotel and other non-traditional locations.

Many factors affect the sales, costs, and expenses of your Franchised Store. Such as the Franchised Store’s size, geographic location, menu mix, and competition in the marketplace. The presence of other Coffee stores; the extent of market penetration and brand awareness that Starbucks stores have attained in your market. Also, the quality of management and service at your Franchised Store are major factors.

Is the Starbucks Franchise Profit Worth the Franchise Cost?

To assign a valuation multiple for Starbucks’ stores, we leverage estimates from DealStats, a database of acquired private company transactions sourced from U.S. business brokers and SEC filings. We reviewed the larger franchise industry as well as selling price multiples for larger systems where more transaction data is available.

However, as an owner of multiple Starbucks licenses, you do have the ability to make a profit. Coffee shop owners with over $5 million in sales have a median multiple of 0.86. So, if you had 10 Starbucks stores, amounting to $6,175,000 in sales, selling your multiunit franchise system would amount to $12,350,000. This will make you a profit of over $1 million as the investment would be $11,000,000.

Deals in this industry usually close for about 86% of the asking price.

How many Starbucks Franchises currently operate?

As of November 2021, the company had 33,833 stores under the Starbucks brand in 80 countries. 15,444 of these were located in the United States. Out of Starbucks‘ U.S.-based stores, over 8,900 are company-operated, while the remainder is licensed. That puts Starbucks at 57% licensed stores with the other 43% being franchised locations. That said, a majority of Starbucks locations are actually located outside the US.

Starbucks has 32,660+ locations spanning 80 countries and territories on six continents.

What are Starbucks’ menu offerings?

Starbucks sells merchandise such as branded mugs, tumblers, coffee presses, and scoops in addition to food. Certain locations that are branded “Starbucks Evenings” also offer beer, wine, and appetizers. In addition to selling its products at its stores, a wide range of items from Starbucks such as Starbucks-brand coffee, ice cream, and bottled coffee-based cold drinks are available at convenience stores and superstores all across the US market and in some other countries.

Which brands does the Starbucks Corporation own?

In 2011, Starbucks acquired juice company Evolution Fresh for $30 million. Subsequently, Starbucks wanted to start a chain of juice bars starting around 2012. Its first store opened in San Bernardino, CA and plans for a store in San Francisco were to be launched in early 2013. Also in 2012, Starbucks began selling a line of iced Starbucks Refresher beverages that contain a green coffee extract. The beverages are fruit flavored and contain caffeine but are advertised as having no coffee flavor. Starbucks’s green coffee extraction process involves soaking the beans in water.

Ethos Water, a brand of bottled water owned by Starbucks since 2003, is sold throughout North America. In 2009, Starbucks introduced a line of instant coffee packets, called VIA Ready Brew. The first two VIA flavors were Italian Roast and Colombia.

How has Starbucks (NASDAQ: SBUX) performed in the market?

In June 1992, at the time of the initial public offering, Starbucks had 140 outlets, with revenue of $73.5 million, up from $1.3 million in 1987. That put the company’s market value at $271 million. The 12% share of the company that was sold raised around $25 million. This money enabled Starbucks in doubling the number of stores it had over the next two years. By September 1992, Starbucks‘ share price had risen by 70%. 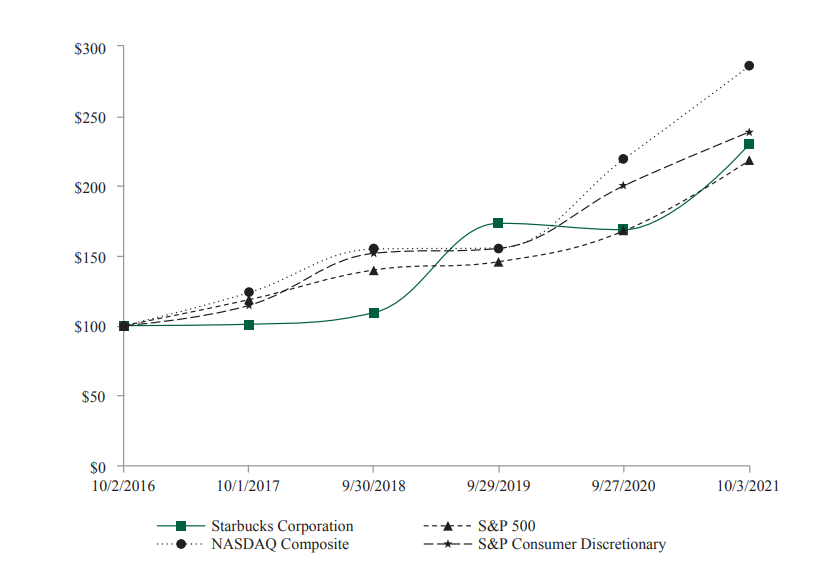 Discretionary Sector (the S&P Consumer Discretionary), a peer group that includes Starbucks and serves as the industry benchmark.

Starbucks’ stock has consistently posted higher stock prices except for in 2020 when the price was heavily affected by COVID. Over the years between 2016 and 2021, Starbucks has outperformed the S&P 500 but falls short of the returns from the NASDAQ Composite and the S&P Consumer Discretionary Indices.

Consolidated results of operations (in millions):

In 2021, Starbucks has a net revenue of $29 billion. This is an increase of $5.5 billion, or 24%, over fiscal performance in 2020. The growth in company-operated store revenue was driven by a 20% increase in comparable-store sales. There were 524 new company-owned store openings in that period. Starbucks had earnings after taxes of $4.1 billion. However, the Net gain resulting from the divestiture of certain operations was $865 million due to the sale of Starbucks’ ownership interest in their South Korea joint venture. This is a good sign of strong growth as a company.

Starbucks plans to increase to 55,000 stores by 2030 – up from 33,000 in 2020. This is going to drive deeper brand penetration and increase brand awareness in the domestic and international markets. This will generate more revenue for stores, as more and more people head to Starbucks for their coffee. Starbucks is the biggest coffee chain in the world and it intends to keep it that way.

The company opened 313 net new stores in Q2 of 2022, ending the period with 34,630 stores globally: 51% company-operated and 49% licensed. Locations in the U.S. and China comprised 61% of the company’s global portfolio, with 15,544 stores in the U.S and 5,654 stores in China Consolidated net revenues were up this quarter by 15% to a Q2 record of $7.6 billion. Global comparable store sales increased 7%, driven by a 4% increase in average ticket and a 3% increase in comparable transactions. 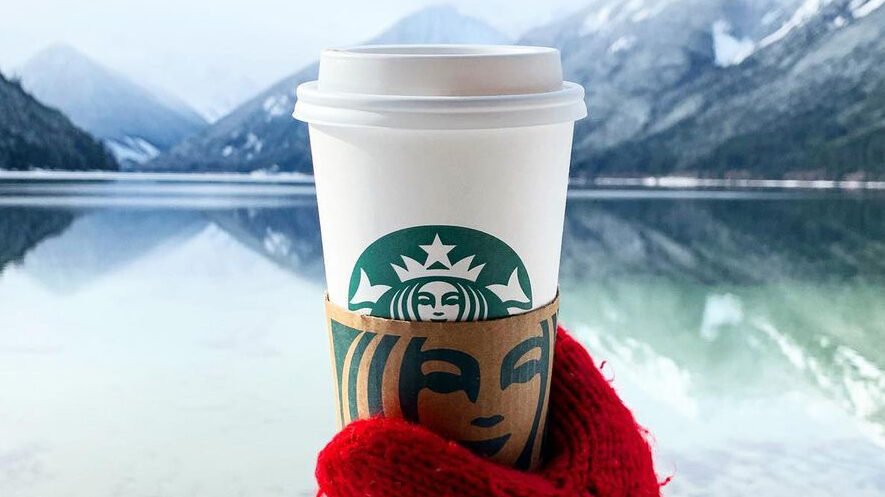 What are some alternatives to a Starbucks Franchise?

A 15% profit margin would yield estimated annual profits of $88,158. This means it would take nearly 9-10 years to recoup your investment depending on whether your store is a kiosk or coffeehouse. While Scooter’s is a growing company and has seen increasing gross sales over the past six years, the 7-14 year timeframe that you could reasonably expect to recoup your initial investment may be a long time for one to wait.

A 15% profit margin would mean it would take nearly 4.5 years to recoup your investment. Based solely on the Franchise Disclosure Document, Biggby may be an exciting investment opportunity for potential franchisees. The company presents itself as an up-and-coming player in the industry focused heavily on community values and engagement. It is offering a chance to be a part of an industry that has been long present. While still in its early stages, Biggby Coffee’s growth seems to be accelerating.

Based on the median sales provided by Dunkin’s Drive-Thru franchise locations, at an average of a 15% profit margin it will take around 5.5 years to recoup your investment. This is in the same range as other franchise opportunities. You may not get a 15% profit margin which would elongate getting a return on your investment. Dunkin’ Donuts offers people the opportunity to be a part of a business that has high net sales and is rapidly expanding. It is impossible to understate the brand recognition that Dunkin’ has in the US market.

A 15% profit margin would yield estimated annual profits of $158,144. This means it would take nearly 11 years to recoup your investment. While Tim Hortons is a growing company and has seen increasing gross sales, the 8-14 year timeframe that you could reasonably expect to recoup your initial investment may be a long time for one to wait.

Overall, Starbucks is a very profitable company that operates both company-owned and licensed units. Even though the pandemic did take a toll on their earnings, their quarterly report shows that they were able to make a strong rebound in 2021 and will likely continue to do so. Although the cost of coffee has increased due to limited supplies, the fact that Starbucks dominates the coffee beverage industry helps mitigate these risks and renders it a strong force in the broader food and beverage industry.

Everything you need to know about the Starbucks franchise and 3 alternatives to invest in ! 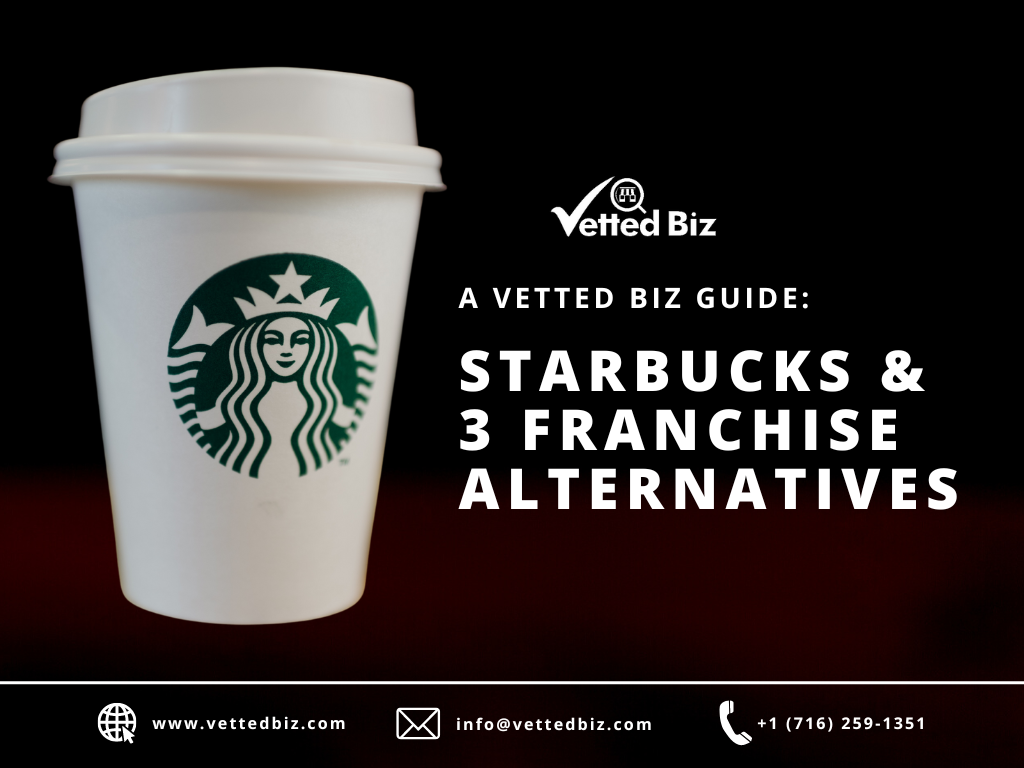