This article is based on its latest FDD

Planet Fitness franchise was founded in 1992 by Marc and Michael Grondahl in Dover, New Hampshire. The Grondahls had acquired a struggling Gold’s Gym franchise and closed it in 1993. They opened a new gym called Coastal Fitness and the Grondahls hired current CEO Chris Rondeau, who was still in college at the time, to run the gym’s front desk. The Grondahls changed the gym’s name to Planet Fitness in 1994.

After a few years of growth, Planet Fitness started franchising in 2003 with the first franchised gym opened in Florida. Planet Fitness’ growth continued over the next decade and in 2013, TSG Consumer Partners, LLC became an equity partner in the Planet Fitness franchise. At that time, Michael Grondahl stepped down as CEO and Chris Rondeau took his place and has held the position since.

The franchise has locations in the United States, Canada, Dominican Republic, Panama, Mexico, and Australia.

How is Planet Fitness Franchise Positioned in the Fitness Industry?

The U.S. has the biggest Fitness market in the world, both in terms of revenue and in the number of members enrolled in a fitness facility. The Fitness Center industry has over 111,000 businesses with a market size of $34 billion, and it supports over 800,000 jobs.

After a few years of growth, Planet Fitness started franchising in 2003 with the first franchised gym opened in Florida. Planet Fitness’ growth continued over the next decade and in 2013, TSG Consumer Partners, LLC became an equity partner in the Planet Fitness franchise. At that time, Michael Grondahl stepped down as CEO and Chris Rondeau took his place and has held the position since.

Today, there are Planet Fitness franchise locations around the U.S. as well as Canada and the Dominican Republic.

How Much is a Planet Fitness Franchise?

The estimated total investment necessary to begin the operation of a Planet Fitness Franchise ranges from $1,625,600 – $4,921,000. The following costs are part of the upfront costs included in the initial investment for Planet Fitness locations. Many of these are one-time fees that are needed to launch the franchise. Review the chart below to see how much it costs to buy a Planet Fitness franchise in 2022.

These figures are estimates based on Planet Fitness’ and its affiliates’ experience in operating locations. Your experience may vary depending on whether you finance tenant improvements, your location, and other factors. You may need additional operating capital, or you may need it for a longer period of time.

The biggest expenses in the additional costs section are leasehold improvements and construction costs which vary greatly from $1,250,000 to $2,163,000. This large discrepancy indicates the potential different costs you could face when building your Orange Theory franchise as a franchisee. Depending on the location and pre-existing structure that is being purchased, you could see your expenditure being on the lower or higher end of this spectrum. It is important to talk to other franchisees and see what their costs were for leasehold improvements and construction.

This investment is much higher than the industry standard of $253,000. This metric is the standard industry investment amount for a single unit franchise investment in this industry. Our research and analytics team analyzed over 120 franchise concept investment breakdowns in order to calculate this figure. 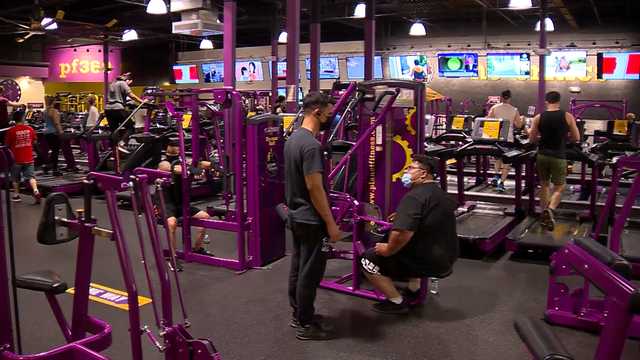 That said, as of June 2022, Planet Fitness has paused offering franchises. Their website reads, “We are not currently accepting new franchisee applications for US expansion.”

Your Royalty payment is currently based on the total gross monthly and annual membership fees for the Planet Fitness business that are due and payable to you each month and annually, as applicable, by or on behalf of your members through authorized EFT withdrawals (the “EFT Dues Draft”), regardless of the amount of membership fees you collect.

Planet Fitness estimates the total costs to re-equip your facility with both cardio equipment and all other exercise equipment will range from $314,000 to $922,000 every 5 to 7 years.

Your actual costs may be higher or lower depending on the size of your Planet Fitness business, the volume, and usage of your members, or changes in the market.

You must maintain the franchise premises according to Planet Fitness brand standards. Therefore, this may include substantial remodeling of your premises as frequently as every 5 years

Except for signage, Planet Fitness will not require substantial remodeling more often than every 5 years during the term of the Franchise Agreement.

Planet Fitness estimates the costs to upgrade and/or remodel your facility will range from $70,000 to $600,000 every 5 years.

Your actual costs may be higher or lower depending on the size and location of your Planet Fitness business. 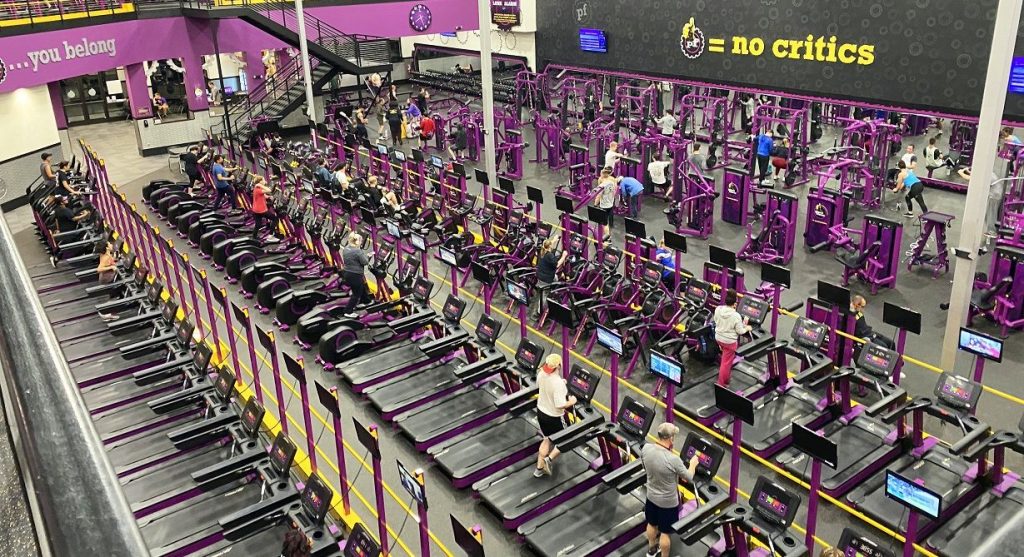 Due Date: Expended according to Planet Fitness’ Methods of Operations as per your advertising budget.

Paid by you to advertisers or Planet Fitness if it elects to collect from you.

How Much Do Planet Fitness Franchise Owners Make?

-In thousands and rounded; represents electronic funds presented for draft for the 12 months of calendar year 2019 and 2020, respectively.

The highest Planet Fitness franchise made over 3 million dollars in revenue, whereas the lowest earning one made $165,000. These numbers indicate that potential earnings can vary significantly, and it depends on factors such as locations and how well the business is run. 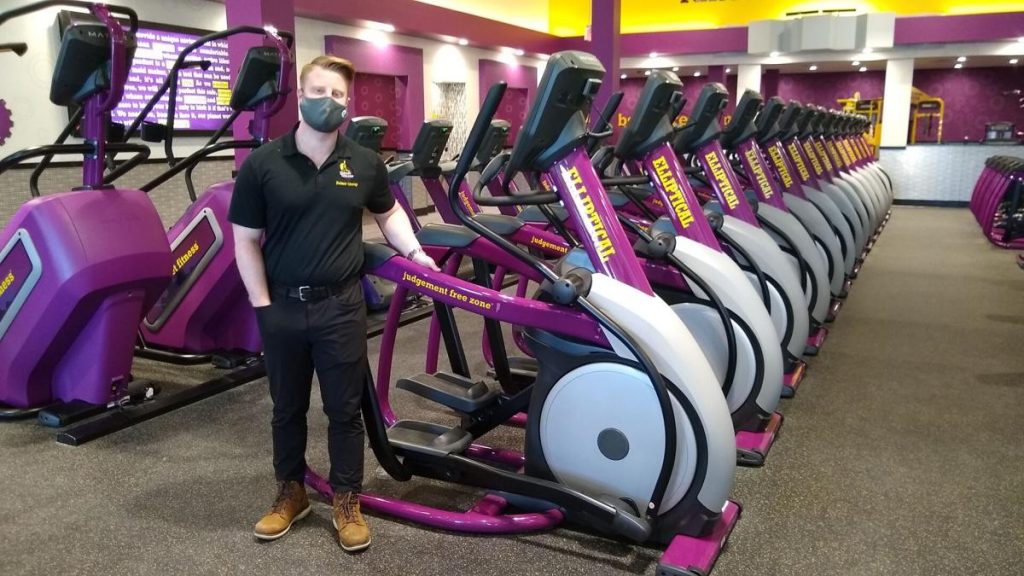 Is Planet Fitness Franchise Profit worth the Cost?

To assign a valuation multiple for Planet Fitness franchises, we leverage estimates from DealStats, a database of acquired private company transactions sourced from U.S. business brokers and SEC filings. We reviewed the larger franchise industry as well as selling price multiples for larger systems where more transaction data is available.

Even if your network of Planet Fitness franchises earns above $% a million, you will not be able to recover costs just by selling it.

How many Planet Fitness have opened and closed?

Planet Fitness franchise is growing, and it is growing fast.

Before the pandemic, it was growing at a rate of approximately 200 units a year, which is impressive. Even after the pandemic hit, it continued to grow at a rate of over 100 units. This could be an indicator that franchisees are doing really well. 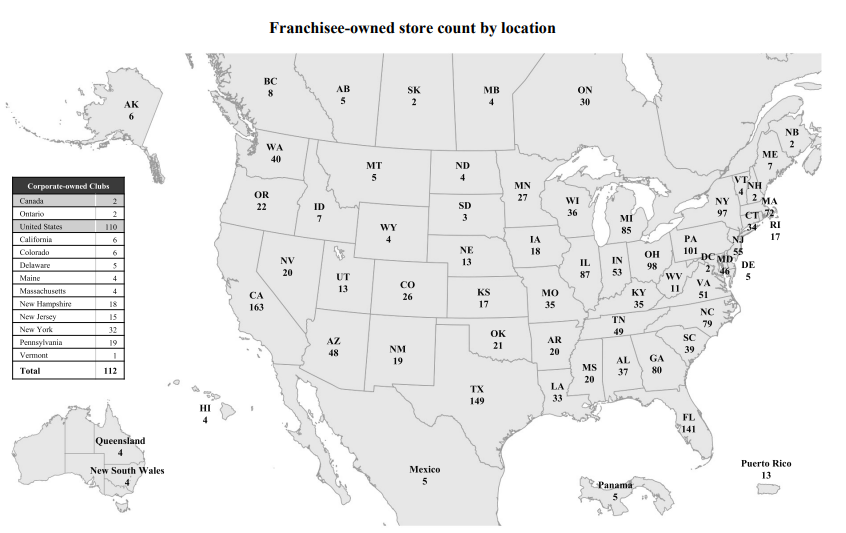 As of December 2021, 98% of all franchised stores were owned and operated by A franchisee group that owned at least three stores, and while Planet Fitness’ Largest franchisee owned 175 Stores, Only 33% of its franchisee groups own more than 10 stores.

The graph below and the table that accompanies it depicts the total return to shareholders between 2015 and 2021 on Planet Fitness’ class A common stock relative to the performance of the S&P 500 Index and the Russell 2000. The graph includes a comparison against the Russell because there is no industry benchmark or line-of-business index for the fitness industry or a peer group that is publicly traded. 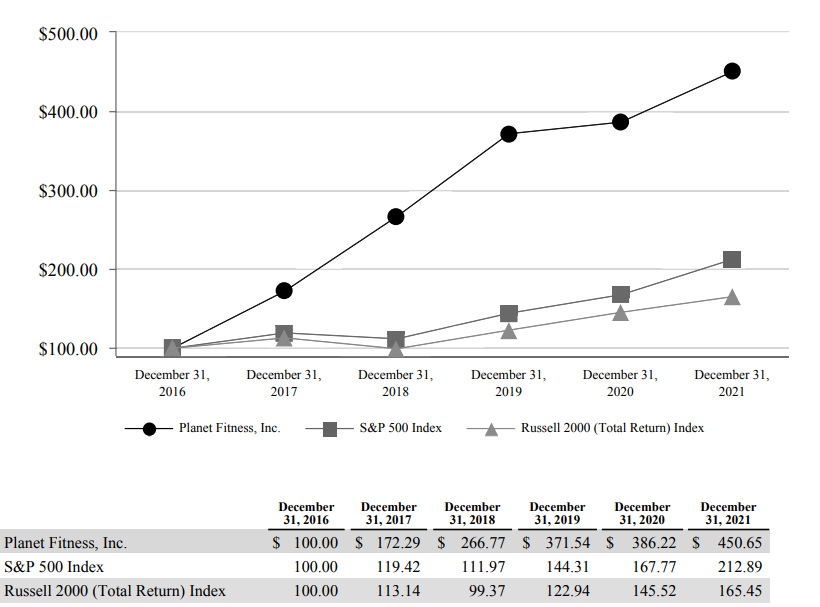 As can be seen, Planet Fitness stock has outpaced the S&P 500 by almost 2x.

Orange Theory Franchise was founded in Boca Raton, Florida in 2009. Co-founder, Elle Latham, decided to open a gym to implement her personally designed workout, which eventually became the basis for Orange Theory’s system. After establishing a strong reputation across the fitness industry, Latham decided to seek a larger challenge and transitioned from the study of physiology to owning a gym that implemented a business model that remains in place across all studios to this day: offering trainer-led group workout sessions, which are broken into intervals of cardiovascular and strength training. 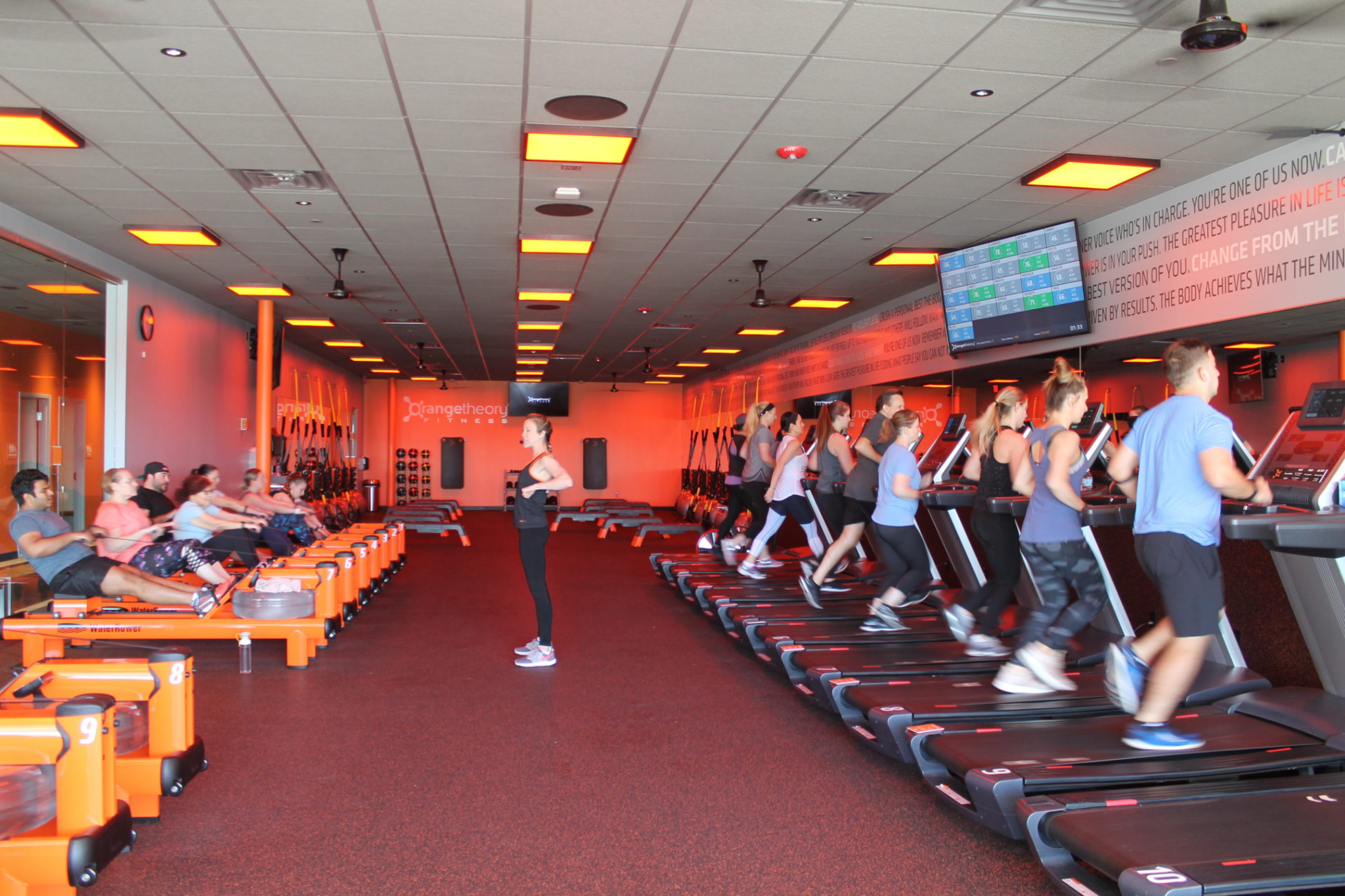 Franchising began one year later, and today Orange Theory studios can be found in 18 countries, and across 49 states. The concept currently has over 1,000 franchises in the United States and another 150 international locations and is a subsidiary of Ultimate Fitness Holdings. Orange Theory is currently headquartered in Boca Raton, FL, and is run by its CEO Dave Long who previously served as the main developer and owner of the European Wax Center. Orange Theory was ranked 49th in the franchise 500 rankings according to entrepreneur.com.

Orange Theory’s success is quite similar to Peloton’s rise to fame. Both of these fitness companies, while they differ in business models, use your own fitness data and others to create a competitive atmosphere. Orange Theory uses your heart rate to show your exertion potential compared to the maximal effort and compares you to your peers in classes. This model has become extremely sticky in the fitness industry because while many people want to achieve their fitness goals, they innately lack motivation. Building in competition to workouts enhances one’s motivation and keeps consumers coming back.

Investing in an Orange Theory franchise is an interesting opportunity, especially for individuals looking to make their way into the Fitness industry.  The prospects for growth and success within the industry and the Orange Theory brand itself, are extensive, and some markets continue to be available as they move forward with growing their presence across the country. If you are an individual with a passion for fitness and are willing to invest an amount ranging from $657,542 – $2,105,322 or more, Orange Theory might be the right fit for you.

Planet Fitness offers people the opportunity to be a part of the fitness business, but we do not believe this is sustainable. There are very few reasons why one might want to open a Planet Fitness franchise. So long as you are not decided on the fitness industry, we recommend you have a look at other offerings.

We believe that this franchise is an option for those that are passionate about fitness and are willing to put in the hours to make the business run smoothly. We also suggest that you speak to 3 – 5 Planet Fitness owners before opening one yourself.

While this may be the business for you, make sure also to check out other companies offered on Vetted Biz and in the Fitness Industry.