Kentucky Fried Chicken was founded by Harland Sanders in 1930 when he inaugurated the first Sanders Court & Café in Corbin, Kentucky. After six years of success, Sanders was awarded the Kentucky Colonel position for supplying extensive resources to his community. By 1952, his business had outgrown itself. It had expanded to such an extent that he decided to grant KFC’s first franchise to his friend, Pete Harman. In turn, he opened the first KFC franchise later that year in Salt Lake City, Utah. Throughout these 68 years, the franchise has expanded to over 20,000 stores in 145 countries which are committed to spreading the unique Colonel Sanders chicken dinners both domestically and internationally.  KFC is currently headquartered in Louisville, Kentucky, and is run by CEO, Sabir Sami. As of 2021, KFC has 3900+ locations across the USA.

How is KFC and parent YUM! Positioned in the Food and Beverage Industry?

The Food and Beverage industry in the USA accounts for 13% of all manufacturing employment in the country. Around 1.46 million people are employed in this industry. Food franchises make up to 36% of the total franchise establishments in the USA and it is expected to create 1.6million more jobs by 2027. The annual growth rate in the industry is around 2% and the EBITDA multiplier is around 3x. KFC is part of Yum! Brands, Inc., which includes Pizza Hut and Taco Bell. YUM! has over 53,000 restaurants in 157 countries and territories under the name of KFC, Taco Bell, Pizza Hut, and The Habit Burger Grill systems. Over 98% of their restaurants are franchised locations. 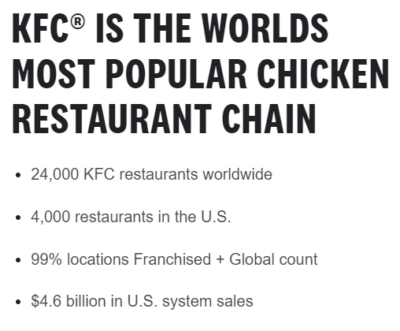 In 2021, KFC did 33% better worldwide in terms of operating profit compared to 2020 while it reduced General & Administrative (G&A) expenses by 9% system-wide. This came at a profit margin of 58% for the franchisor in the entire KFC system that spans the globe.

How Much is a KFC Franchise?

The initial KFC Franchise Fee is $135,000 to $540,000 and is called the Development Fee. You have to pay this upfront fee when opening a KFC franchise. 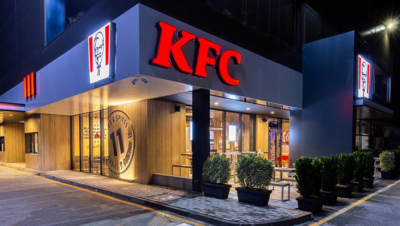 The estimated total investment necessary to begin the operation of a KFC Franchise ranges from $1,440,600 to $3,163,550. The following costs are part of the upfront costs included in the initial investment for a KFC. Many of these are one-time fees that are needed to launch the franchise. Review the chart below to see how much it costs to buy a KFC franchise in 2022.

You need a minimum net worth of $1.5 million and liquid assets worth over $750,00 to start a KFC franchise. However, KFC notes, “Requirements are commensurate with ownership level and may be significantly higher from minimum requirements based on the size of the transaction.”

These fees are pretty standard for a franchise like KFC. 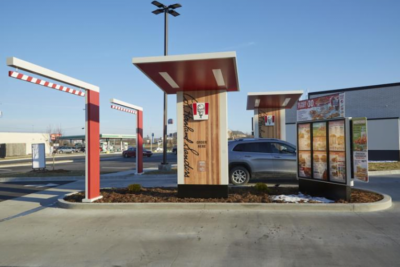 How much do KFC franchise owners make?

Many factors affect the sales, costs, and expenses of your Franchised Store. Such as the Franchised Store’s size, geographic location, menu mix, and competition in the marketplace. The presence of other fried chicken stores; the extent of market penetration and brand awareness that KFC stores have attained in your market. Also, the quality of management and service at your Franchised Store are major factors. 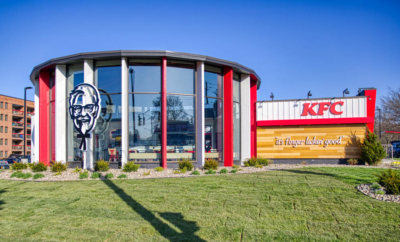 Is the KFC Franchise Profit Worth the Franchise Cost?

To assign a valuation multiple for KFC franchises, we leverage estimates from DealStats, a database of acquired private company transactions sourced from U.S. business brokers and SEC filings. We reviewed the larger franchise industry as well as selling price multiples for larger systems where more transaction data is available.

KFC as an industry leader

KFC’s U.S. digital sales soared 70%, year-over-year, driven by its delivery service channel and e-commerce platform that launched nationwide early last year. In Q4, KFC also introduced “Quick Pickup,” where guests walk in and grab mobile orders out of cubbies. It is starting to launch “next-gen” locations, where everything is digital, contactless, and if you’re lucky, you might see a double drive-thru lane.

KFC calls it their “re-colonization” strategy to start increasing the number of locations and start expanding across the U.S.A.

As KFC continues to focus on a higher emphasis on customer service, it recently opened a next-generation concept location in Painted Post, NY.

As of today, 25% of upcoming builds are next-gen restaurants. These locations pack digital integration into a small footprint.

KFC recently extended delivery partnerships with DoorDash, Uber Eats, and Postmates. Clearly, it doesn’t expect third-party delivery to go out anytime soon. Streamlining the process will improve the speed of service, decrease contact, and prevent bottlenecks in the system as drivers wait for orders to come out.

How many KFC units have opened and closed?

Over the last three years, KFC’s franchises have been in decline. The numbers went from 4,035 stores at the start of 2019 to 3,919 stores at the end of 2021. However, this is not a bad sign and KFC is a behemoth in the industry in today’s day and age and is going nowhere.

KFC offers a ton of fried chicken-related dishes. From its signature Zinger burgers to chicken popcorn, chicken wings, and boneless strips, its menu offerings are extensive.

No stranger to having to innovate to position itself strongly in new, international markets, KFC Thailand offers shrimp doughnuts; Singapore, egg tarts; Australia, a nacho box, the Double Down Dog (a hot dog wrapped in a bun-sized piece of fried chicken), and the Mac ‘n Cheese Zinger (with a bun made of mac ‘n cheese); and its strongly vegetarian menu that they had to develop for the majority vegetarian Indian market.

They have also offered extremely eccentric products at times like the KFC Firelog which is a fried-chicken-scented log. 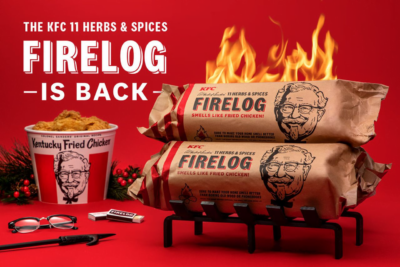 YUM’s history started when PepsiCo acquired Pizza Hut and then Taco Bell in 1977 and then 1978. In 1986, KFC was then sold to PepsiCo. It went on to acquire Chevys Fresh Mex, D’Angelo Grilled Sandwiches, and the American Division of East Side Mario’s. These chains were then sold when Pepsi exited the restaurant market.

Yum! was created in 1997 under the name of Tricon Global Restaurants, Inc. as the parent corporation of KFC, Pizza Hut, and Taco Bell. It selected Louisville as its HQ.

In 2000, Tricon Global, along with Yorkshire Global, tested multi-branded locations which turned out to be a huge success. By 2002, the test consisted of 83 KFC/A&Ws, 6 KFC/Long John Silver’s, and 3 Taco Bell/Long John Silver’s. In March 2002, they merged to form Yum! Brands. In the same year, Yum! began testing co-branding locations pairing Pizza Hut with Pasta Bravo, Back Yard Burgers, and A&W. An East Dawning test cafeteria-style restaurant was opened in Shanghai in 2004. East Dawning is the fusion of KFC with Chinese-style cuisine and in 2007, 8 East Dawning Restaurants were in operation.

In 2011, Yum! sold Long John Silver’s and A&W to focus on KFC, Pizza Hut, and Taco Bell. The same year, they agreed to purchase the Chinese hot pot chain Little Sheep for HK$4.56 billion. In 2012, KFC opened a location on the West Bank, becoming the first American Fast Food chain to do so.  In the first quarter of 2015, Third Point Management and Corvex Management separately acquired an unspecified stake in the company.

The current CEO of Yum! Brands is David Gibbs. Former CEOs include Greg Creed and David C. Novak. Since 2006, Yum! Brands has served as the corporate sponsor of the Kentucky Derby. On October 20, 2015, Yum! Brands announced that it intended to separate into two independent, publicly-traded companies. Yum China was spun off on November 1, 2016. 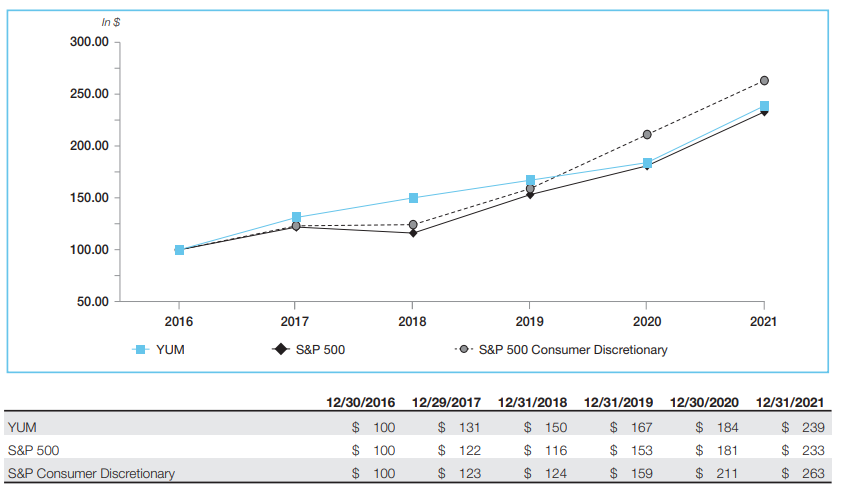 YUM’s stock has grown steadily since 2016. When compared to the market benchmark for its industry, the S&P Consumer Discretionary, it has not grown as fast. However, its growth has still outpaced the S&P 500. In 2021, YUM had a comprehensive income of $1.57 million up from $1.29 million in 2019. This represents a 21.7% growth in net income for the food behemoth. To raise these funds, they issued a lot of promissory notes as detailed below:

The annual maturities of all Short-term borrowings and long-term debt as of December 31, 2021, excluding finance lease obligations of $64 million, and debt issuance costs and discounts of $93 million are as follows:

This puts YUM in a consolidated debt of $11.27 billion as of today. Its financials are strong, but the credit they are operating on might start matching its net cash inflows. Interest expenses on Short-term borrowings and Long-term debt were $551 million, $558 million, and $519 million in 2021, 2020, and 2019, respectively.