Vetted Biz has reviewed and analyzed the SBA 7(a) loan approvals from the fiscal years 2010-2020. The records were obtained through SBA’s official website.

In total, 588,053 small businesses in the U.S. were approved for the SBA 7(a) loan from 2010 to 2020. These businesses are categorized by the North American Industry Classification System, NAICS, that consists of 1,913 classifications

Many of the businesses these loans were previously issued to had different NAICS classifications for each individual loan. Therefore, the Vetted Biz analytics team recategorized these businesses by 22 industries that more accurately reflect the business nature of the concept. Listed on the right you can find how many loans were approved for each industry. 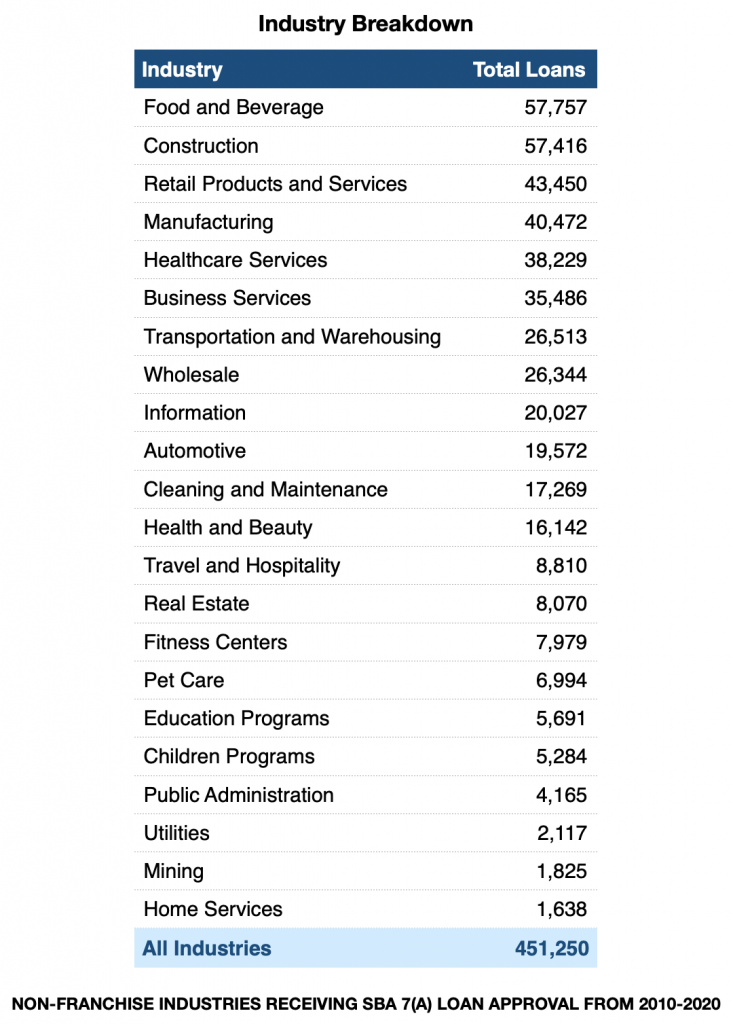 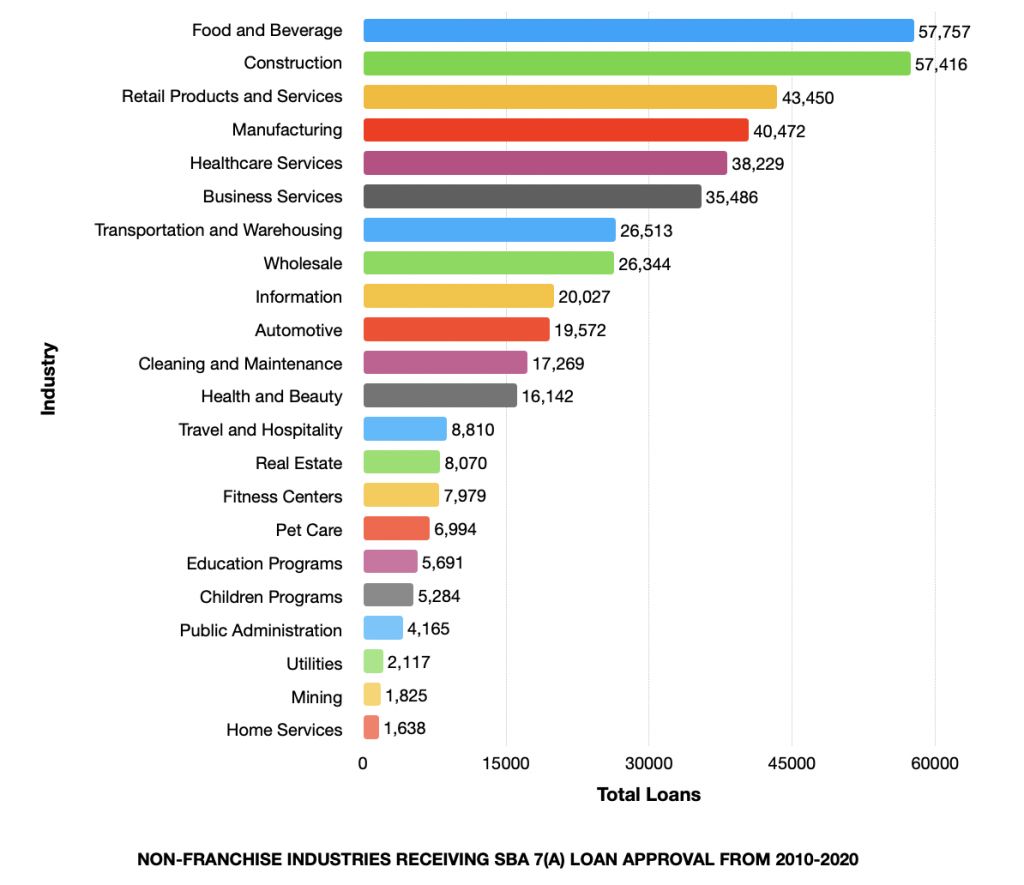 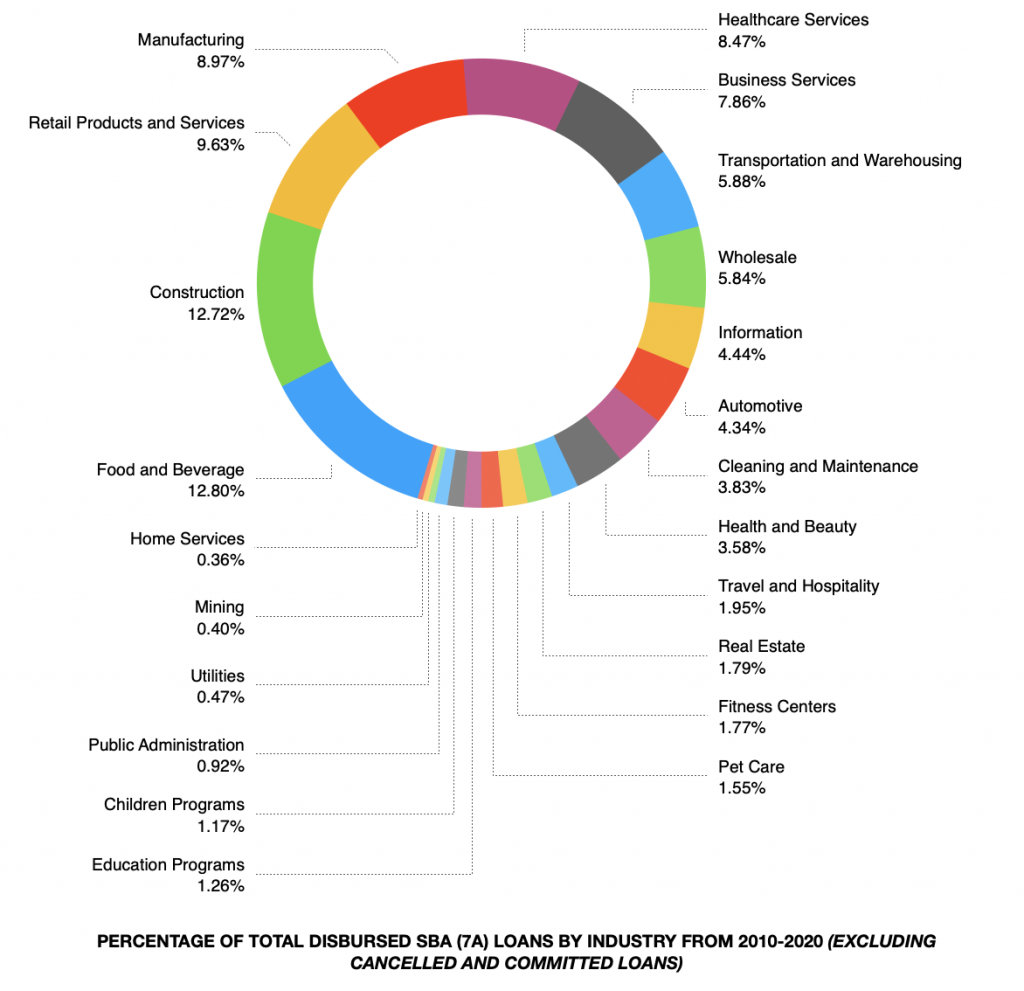 In the pie chart depicting disbursed loans above, from 2010 to 2020, SBA loans for non-franchises within the 7(a) loan program under the Food and Beverage industry had the highest percentage of loans approved with a rate of 12.8%. The Construction industry came in second with 12.72% of the total loans approved and the Retail Product and Services industry in third, with 9.63% of total loans approved. 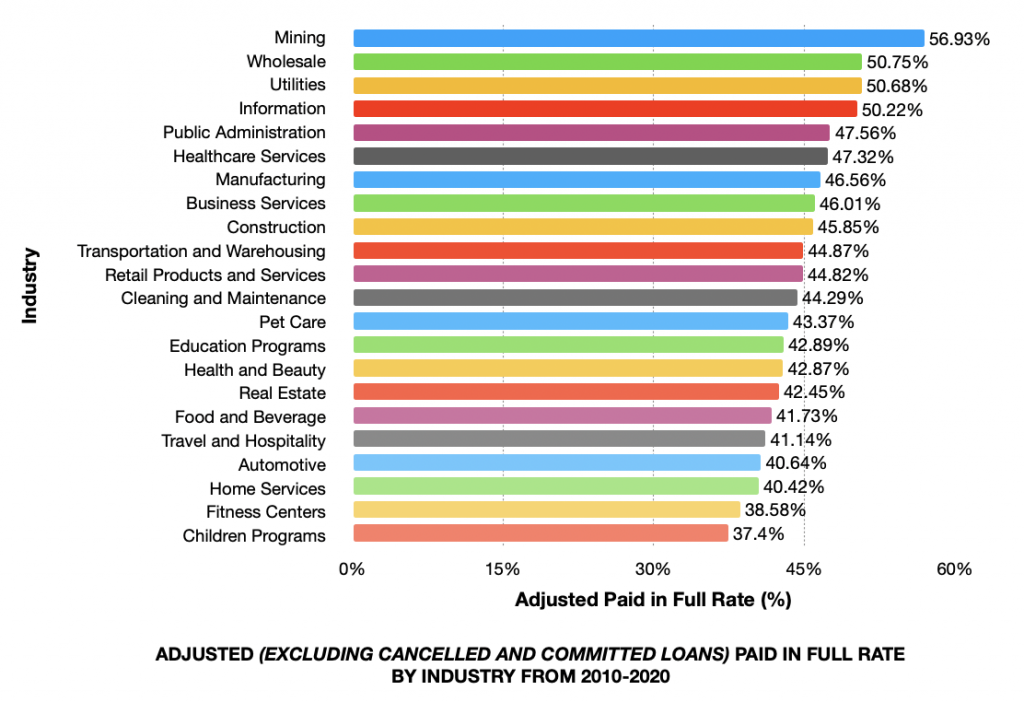 Further analysis was conducted based on the loan status by business industry. The loan status categories are listed below. Note that the most important loan statuses to understand for this analysis is Paid In Full and Charged Off.

The best loan status reflecting financial health of the business is Paid in Full, as the business has already paid off the loans and all interest. In contrast, the worst loan status is Charged Off, as the loan has been defaulted and further collection of debt is doubtful. The SBA recognizes this as a loss and writes the account off from its active accounts receivable.

Vetted Biz reclassified the 1000+ NAICS codes into 22 industries for the non-franchises studied. Within each industry, we studied the rate of the two most important aforementioned loan statuses. The adjusted results of Paid in Full and Charge Off rates for each industry are listed on the next pages, with a table tabulating count of non-franchises by industry under each loan status. Adjusted results exclude loans that were Committed or Cancelled, otherwise known as disbursed loans previously mentioned.

From 2010 to 2020, SBA loans issued to non-franchises within the Utilities industry had the highest Paid in Full rate and one of the lowest Charged Off rates. The Utilities industry involves generating, transmitting, and/or distributing electricity, gas, steam, and water and removing sewage through a permanent infrastructure of lines, mains, and pipe.

Some industries at the same time, have a wider gap between businesses that are doing well and those that are not. In other words, more risk can equal more reward. For example, loans issued to non-franchises within the Wholesale industry has one of the highest Paid in Full rates, but it also has a high Charged Off rate. On the other hand,  loans issued to non-franchises within industries that have lower Paid in Full rates such as the Children Programs and Travel and Hospitality industries, also have lower Charged Off rates.

When exploring optimal businesses to invest in, prospective small business owners must keep in mind the industry as a whole. Reviewing the SBA 7(a) loans is one of many factors to consider when analyzing the success of small business industries.

When prospective business owners are studying the best industries to invest in, beyond looking at separate numbers and loan statuses in general, it is important to understand how the industry functions as a whole. With that in mind, the Paid in Full to Charged Off ratio allows for an extensive insight into how industries and their SBA loans in general are doing that are helpful in guiding the franchisee on the best franchises to consider investing in.

Of these non-franchise businesses, approximately 44% had an Exempt loan status. Therefore, most of these businesses were not able to disclose whether they had Paid In Full, Cancelled, or Charged Off. Although additional information on what a loan’s Exempt status encompasses can be found on a separate page, this nevertheless limits an accurate analysis of SBA non-franchise success overall.  Additionally, it is important to note that the tenure of a loan is normally of 7 years, which means that the data available on loans issued from 2010-2020 is partially limited, particularly due to this fact. Either way, this analysis provides an overview of these loan’s trajectories nevertheless. 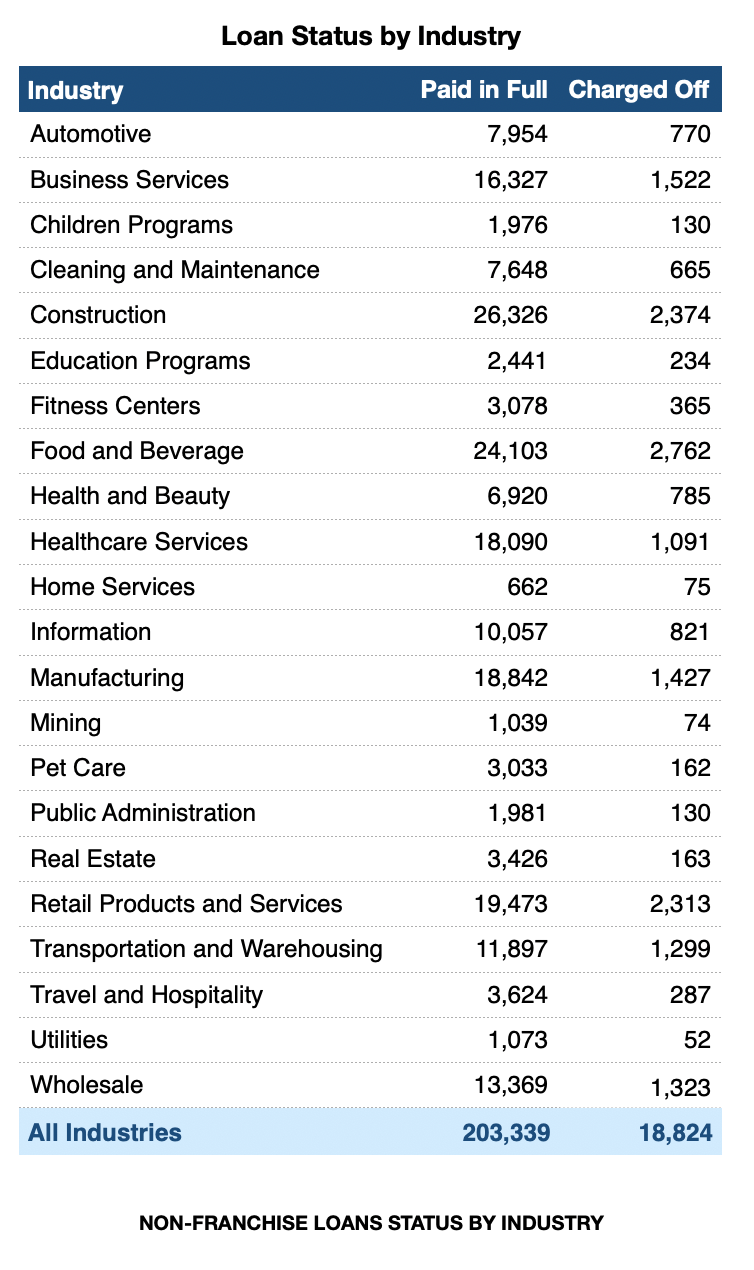 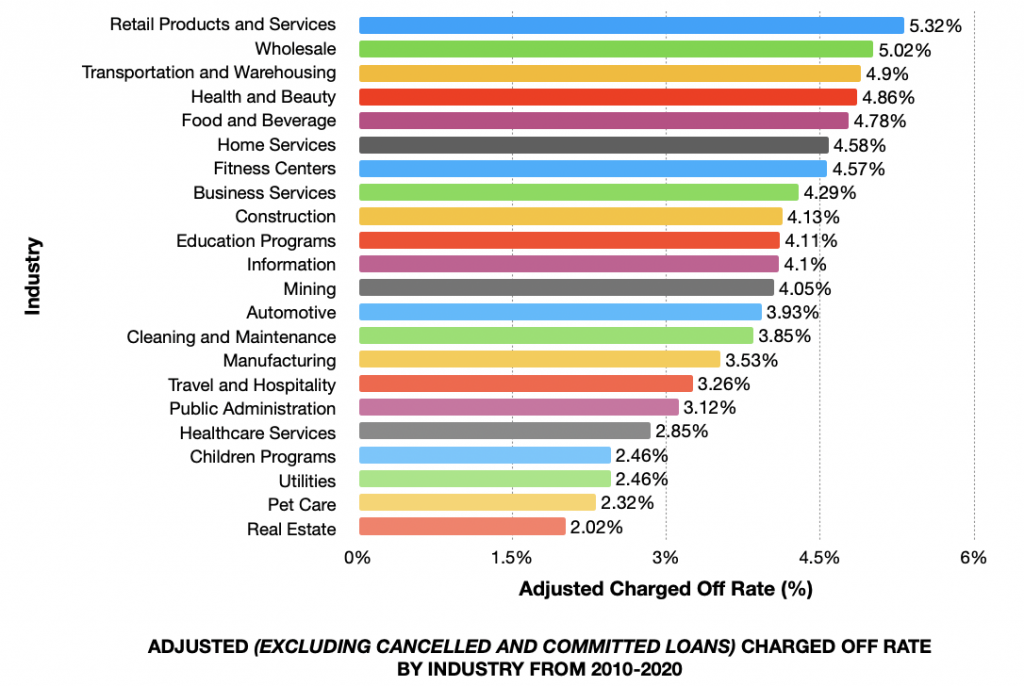 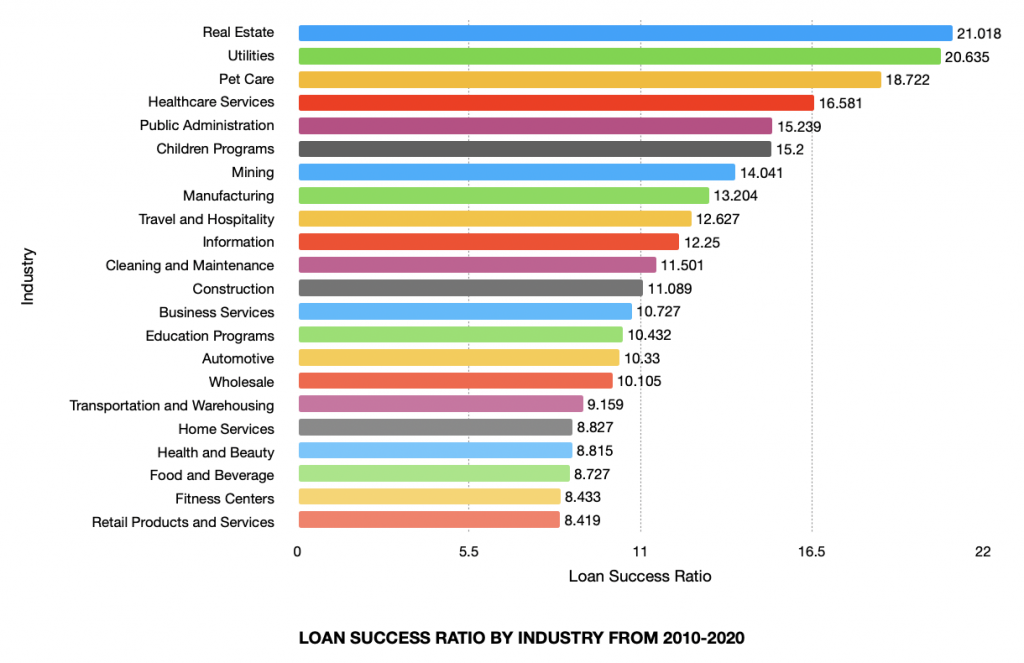